Fred Valente was the first-born American child of Italian immigrant Gerardo (Jerry) Valente and his wife, Italian immigrant Anna D’Ascenz a young widow with two infant sons. In 1936, the handsome Fred wed Irene Heter, a beautiful woman who worked in the office of Denver’s Garden Farm Dairy where he worked as a milk delivery driver. They made their home in North Denver and Fred ran a small grocery until the land was taken for the building of Interstate 70. 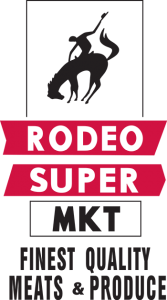 In 1946, the Valentes relocated to the “country” with their children where Fred acquired acreage and ranched. In 1953, on 73rd Avenue, Fred opened the Rodeo Supermarket across the street from Westminster’s Fire Department and City Hall on what was Westminster’s Main Street. The Rodeo was Westminster’s first supermarket and place for one-stop shopping. Quickly, the Rodeo became the cornerstone of Westminster’s business community. As times changed and larger competitors came to town, the Rodeo remained unfazed largely as a result of Fred’s unwavering commitment to quality, price, customer service and community – core values that endure today.

In 1970, the Rodeo Supermarket acquired one of the larger markets on 72nd and Meade which Fred had put out of business and the Rodeo moved. Shortly, thereafter, Fred acquired the remainder of the Westminster Center, which the Rodeo anchored. In 1972, Fred’s son Larry who had been working in the store since 1955 at age 12 assumed management of the business with Fred’s passing. Larry continued to run the market with his sisters and children all working in the store at various times and Irene – never one to meddle – quietly overseeing things until her passing in 1981.

With Colorado’s economic decline of the late 1980s, Larry, wife Elaine and children Dino and Gina made the tough decision in 1990 to close the doors. After a couple months off and without ever fully ceasing to do business, Larry was persuaded to open a new market focusing on a deli concept to sell Italian canolis using Fred’s famous Italian Sausage recipe. The doors of Valente’s Deli Bakery were opened just across the parking lot from the former Rodeo and the community warmly embraced the concept.

Joined by son Dino, Valente’s continues to grow based upon commitment to the core values of quality, price, customer service and community. Since re-opening, Valente’s has grown from a small canoli and sandwich shop to metro-Denver’s most complete Italian market offering the largest selection of imported Italian pastas, sauces, olive oils and foodstuffs complimented by the most complete Italian deli, a large bakery, a meat market, a canoli and sandwich shop and coffee bar.

In “La Cucina Valente,” Valente’s now makes Elaine T. Valente’s homemade sauce, homemade lasagna, take-n-bake pizzas, and more new offerings every day. Of course Fred’s signature sausage is still made the correct way – fresh daily and hand-stuffed! If you are having a party or gathering, contact Valente’s to assist you whether you want simple meat and cheese deli platters, boxed lunches for a meeting or pasta, sausage and meatballs for a hot food buffet. If you are new to cooking or an experienced cook, Valente’s staff will guide you through your recipe and assist you in gathering the finest ingredients for your meal.

At Valente’s, you are always part of the family!